ExpertGPS is GPS map software for your Windows computer or laptop. ExpertGPS makes it easy to transfer waypoints, routes, and tracks, as well as GPS, GIS, and CAD data, to and from your Garmin eTrex.

ExpertGPS gives you unlimited, FREE access to every topo map in the USA, as well as high-resolution aerial photos, so you can zoom in on any trail or job site. ExpertGPS even works with your own scanned maps, and data from over 100 different mapping, GIS, and CAD programs.

Download ExpertGPS
Download now and start your free trial of ExpertGPS 7.14
New features were added to ExpertGPS on Sept 4, 2020
ExpertGPS runs on Windows 10, 8.1, and 7. 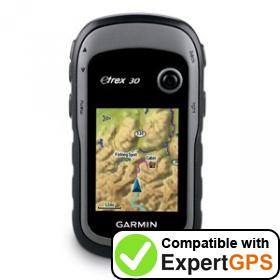 All USB-based Garmin eTrex GPS receivers are supported in ExpertGPS.

All Foretrex GPS receivers are supported in ExpertGPS.

Don't see your GPS above or on the master list of Garmin GPS receivers supported in ExpertGPS? Garmin comes out with new models faster than we can list them on the site. If you have a new GPS that isn't on this list yet, it's almost certainly guaranteed to work in ExpertGPS. Select the closest match in ExpertGPS, or send us an email and we'll add it to this list!